On the one hand, Dr. Stojdl is engineering viruses that seek out tumour cells in the brain, infect them and flag them as dangerous — yet don’t infect healthy cells.

“Brain tissue is not very amenable to regeneration. So, if you are using a virus in the brain, you have to be sure it is only going to infect and destroy the cancer cells,” says Dr. Stojdl, a BioCanRx-funded investigator who is a senior scientist at the Children’s Hospital of Eastern Ontario (CHEO) Research Institute and a professor at the University of Ottawa.

On the other hand, the virus needs to be potent enough to do its job: kick-starting the immune system and launching a deadly attack on cancer cells without causing too much inflammation, which can have serious consequences.

The approach that Dr. Stojdl is developing is known as oncolytic virus immunotherapy (or OVIT), a powerful emerging biotechnology that could help turn the tide in cancer treatment.

Through support from BioCanRx and the Canadian Cancer Society, and in partnership with the CHEO Foundation, Dr. Stojdl’s Catalyst Project is adapting the OVIT platform to treat one of the most deadly forms of brain cancer, glioblastoma multiforme (GBM).

Glioblastomas are the most common malignant brain tumours in adults, growing rapidly and invading deeply into the brain. Treatment options for GBM have not improved in 35 years, and the average survival time for GBM patients is just under 15 months. Added to these grim facts is the profound way that this cancer changes patients.

To begin developing an oncolytic immunotherapy for brain cancer, the Stojdl lab examined a bank of 20 potential viruses, looking for the perfect candidate that could balance safety and potency. After years of testing, they narrowed the field to the two best candidates: Farmington virus (FMT) and Maraba virus (MRB). Dr. Stojdl’s current Catalyst Project will determine which virus will move forward into clinical trial.

Both viruses will be engineered to express an antigen associated with brain tumours called pp65, which is also found on human cytomegalovirus (HCMV). Antigens are biological flags that can activate the immune system and pp65 antigens are expressed by most GBM tumours. 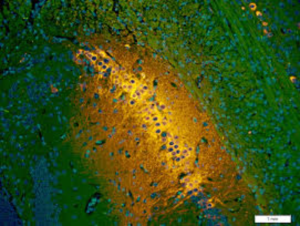 Dr. Stojdl’s Catalyst Project will design Farmington and Maraba viruses loaded with pp65 to launch multiple anti-cancer missions. First, the virus will travel to the spleen to activate and mobilize the immune system against the pp65 cancer target. The virus will also travel to the brain to infect and kill cancer cells while, at the same time, acting as a beacon that attracts the activated immune cells to take action against the cancer cells.

The beauty of using pp65 as a cancer target is that, according to the U.S. Centers for Disease Control and Prevention, between 50% and 80% of the population has already been exposed to this antigen through natural HCMV infection, and would therefore be primed to benefit from this therapy. In addition, testing for HCMV exposure can be done with a simple blood test.

“Previous exposure to HCMV means our immune systems need less training to become fully activated against pp65 targets in the cancer setting. So, we are making a super-powered cancer-fighting virus to amplify an immune response that already exists. This approach is designed to achieve a precisely balanced therapy that will be safe for the brain and yet effective against brain cancer,” explains Dr. Stojdl.

Regardless of which virus is used, once the tumour attack is over, the immune system remains permanently trained to recognize pp65 antigens, which researchers hope will provide long-asting protection against GBM recurrence.

“To get rid of the tumour and prevent it from coming back: this is the hope,” says Dr. Stojdl, who walks through the halls of a children’s hospital every day — a place where, for him, hope just isn’t good enough.

Over the years, Dr. Stojdl has met with, received support from and been motivated by families who have lost their children to this disease. He is always humbled and inspired by their drive and dedication to push past their loss and support his research to make sure other families don’t have to face the terrible helplessness they experienced as their child succumbed to this disease.

For all of them, he dearly wants to make progress — to push past hope and provide an effective treatment.

The BioCanRx research program is designed to support promising and exciting technologies through development from a Catalyst Project to an Enabling Study, and ultimately into a Clinical Trial — in partnership with industry, charities and other agencies. The Research Management Committee of BioCanRx assesses applications at each stage of the research pipeline and reviews projects as they progress.

To find out more about Dr. Stojdl’s research, and his path to clinical trial, please visit www.stojdllab.ca