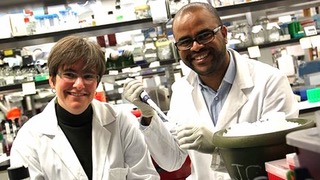 It just doesn’t sound good – triple negative breast cancer, commonly abbreviated as TNBC. It sounds a lot like starting out with three strikes against you.

And it’s not good. Some 10-20% of Canadian women diagnosed with breast cancer have the triple negative variety. It means that the three most common receptors in breast cancer – estrogen, progesterone, and the Her-2/Neu gene – aren’t present. In turn, this means that treatments based on drugs that target these receptors aren’t going to work, leaving chemotherapy as the fallback treatment.

And that’s not good either, says McMaster University’s Dr. Sam Workenhe. Chemotherapy is “associated with a lot of toxic effects,” including impact on future quality of life, a concern given that younger women are frequently diagnosed with TNBC.

More bad news? TNBC tumors don’t respond well to immunotherapies, specifically checkpoint inhibitors, which are intended to break down the tumor’s resistance to immune system attacks. Their defences are just too good.

Dr. Workenhe is working with Dr. Karen Mossman, also from McMaster, and Principal Investigator on a BioCanRx-funded Catalyst project (In vivo genome-wide CRISPR/Cas9 screen to identify genes that limit curative checkpoint blockade immunotherapy in triple negative breast cancer) to improve the odds for women with TNBC. The project’s goal is to use a genetic screen to identify the genes that help a TNBC tumour resist immune system attacks, making checkpoint inhibitors more effective at shutting down a tumor’s defenses.

The team knows they are on a promising road to success – they know that cytotoxic T-cells, which kill tumors by recognizing and binding to tumour antigens, are found in reasonable numbers in TNBC tumors. The problem is that these T-cells are just not able to find the antigens because the tumors are so good at hiding themselves and secreting molecules that suppress the function of cytotoxic T cells.

So that is the team’s challenge: to “identify any immune suppressive molecules that tumors use to evade immunotherapy,” says Dr. Workenhe.

And to answer that question, the team is turning to one of the most innovative and promising genome-editing technologies out there: CRISPR/Cas9. This technology is adapted for high throughput genome-wide screens to help speed up the task of identifying relevant genes in pooled screens.

Having used CRISPR/Cas9 to identify relevant genes and using Cas9’s ability to edit the genome at precise locations to knock them out, the research team will use tumors with these genes knocked out to test whether the knocked out gene results in better tumor penetration and killing by activated T cells, thus making tumors more susceptible to immunotherapy. The team will be looking at how knocking out immune-evading genes affects factors such as levels of cytotoxic T cells and their effects on tumour regression, prevention of metastatic tumors (spread of the tumors to other parts of the body), survival and whether the knocked-out genes confer long-term protection.

“We want to use targets identified from the screen to increase the proportion of patients who respond to immunotherapy,” says Dr. Workenhe.

Because the mouse models the team is using recapitulates human TNBC disease, Dr. Mossman is optimistic the findings will translate well to humans. Future steps will be to test the validated targets in patient-derived tumors in humanized mice, before moving on to clinical trials in humans.

That’s where she says BioCanRx has such an important role to play, bringing together the scientists with the clinicians and providing support for them to work together to bring laboratory discoveries into the clinic to improve survival and quality of life for women with TNBC.

As well, the benefits of this research are not restricted to TNBC, she adds.

“The knowledge we gain will help us target other cancers.”