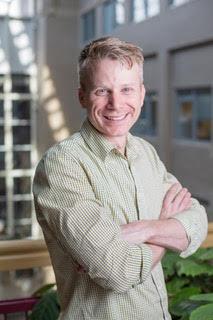 Immunotherapy has become widely accepted, both in research and in practice, as a powerful tool for treating many kinds of cancer. Indeed, it’s often called the “fourth pillar” of cancer treatment, after surgery, chemotherapy and radiation. Dr. Douglas Mahoney, an associate professor at the University of Calgary and translational scientist at the Charbonneau Cancer Institute and Alberta Children’s Hospital Research Institute is using support from a BioCanRx Enabling Grant to take one type of immunotherapy, called CAR-T cell therapy (for chimeric antigen receptor therapy), a step further, by developing a highly personalized treatment for a patient with a rare type of sarcoma.

But first, some background. The patient – let’s call her P – was first diagnosed with Alveolar Soft Part Sarcoma ( ASPS) –a cancer so rare that only about 20 people across Canada have it – when she was 14 years old. The cancer is terminal, with most patients surviving 3-10 years. ASPS is both slow growing and highly metastatic; indeed, by the time P was diagnosed, the cancer had already spread to her lungs and brain. Chemotherapy does not work against this cancer, and radiation is partly effective only against the primary tumour, leaving surgery as the only life-extending option. Six years after her diagnosis, and only 21 years old, P has undergone 10 surgeries to remove tumours from her leg, lungs, brain, spine, colon and pancreas. But, says Dr. Mahoney, at some point in the future, surgery will no longer be possible. The disease is quiescent now, but Dr. Mahoney wants to be prepared when it wakes up, as it surely will.

To do this, a team of scientists led by research associate Dr. Franz Zemp set out in early 2021 to develop a novel CAR-T therapy for P. It’s a complicated undertaking, requiring contributions from scientists and clinicians with diverse skillsets. Fortunately, this expertise has been assembled within the Alberta Cellular Therapy and Immune Oncology (ACTION) Initiative, a new multidisciplinary research program directed by Dr. Mahoney that is dedicated to developing next-generation CAR-T therapies for cancer patients.

CAR-T therapy is a form of immunotherapy that uses genetic engineering to redirect the patient’s own immune system against her tumour. For this to work, CAR-T cells must first be programmed to recognize a target, or antigen, on the outside of the patient’s cancer cells, explains Dr. Mahoney. An ideal antigen is expressed on the surface of every cell within the patient’s cancer, even at relapse, but not expressed on non-cancer cells. It should also be essential to the cancer, meaning that the tumour requires it to function.

This is where P got fortunate, so to speak. ASPS tumours, unlike many other cancer tumours, are homogenous in nature. Other cancers may have many mutations, often differing not only between but also within each tumour, but ASPS is usually driven by a single genomic alteration. Each cell of an ASPS tumour is thought to be “addicted,” to use Dr. Mahoney’s term, to this one particular mutation. As mutations are what drive the expression of surface antigens, ASPS may be a type of cancer that is amenable to CAR T therapy. The trick is finding the right surface antigen.

That was made easier by P’s donation of tumour samples from each of her surgeries – a total of nine different samples from six different organs – to the Clark H. Smith Tumour and Tissue Biobank at the Charbonneau Cancer Institute. This meant that once Dr. Mahoney and his team found an antigen they were excited about, they could validate its expression on nine different samples. In all nine cases, the antigen was highly expressed on each and every cancer cell. Even better, when they tested it on non-cancerous cells, the antigen was rarely expressed on the surface of those cells, meaning the likelihood of unanticipated – and unwanted – side effects was minimized.

“We were super fortunate to have these samples,” says Dr. Mahoney.

The next thing the team needed was to develop a new CAR against the highly-expressed surface antigen. This required two components: a backbone and a targeting domain. They found the backbone in the CAR-T being tested in the CLIC-01 trial led by Dr. Natasha Kekre at the Ottawa Hospital Research Institute and, using a targeting domain extracted from a clinically validated antibody, created a new CAR-T against the antigen found on the surface of P’s tumours. They then tested the CAR for efficacy by engineering it into P’s own T cells and determining how well it killed her cancer cells (grown in the lab) and her tumours (xenografted into mice). The results were unequivocal, with the new CAR-T rapidly killing P’s cancer cells and eradicating her tumours in mice.

Since generating these data, Dr. Mahoney and team have been working with The Ottawa Hospital’s Biotherapeutics Manufacturing Centre to manufacture a clinical-grade version of the CAR-T that is suitable for use in humans, which was produced in July 2022. So what next?

Well, first, the clinical-grade CAR T has to be tested for purity and function and the team is in the midst of those tests. If all goes according to plan, a Clinical Trial Application for a single patient study will then be submitted to Health Canada in late 2022. With approval in hand, the team will then work to obtain local ethics and hospital approvals so that they can treat P when her disease becomes active again.

But while the initial impetus for the project was to help one patient, the team is also moving toward launching a more traditional phase 1 clinical trial that would enrol ASPS patients at five sites across Canada sometime in 2023. As well, the team will explore whether this CAR-T can be used in other cancers that expressed the same target.

“While we built this as a personalized therapy, there is a high likelihood there are other patients who can benefit,” says Dr. Mahoney. “This could become the paradigm for other rare diseases.”