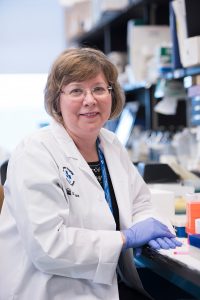 Photo of Dr. Barbara Vanderhyden provided by The Ottawa Hospital

Throughout the world, ovarian cancer researchers using mouse models to further their research on the origins, development or treatment of the cancer can thank Ottawa researcher Dr. Barbara Vanderhyden for making their research possible.

An ovarian cancer researcher for more than a quarter century, and currently the inaugural holder of the Corinne Boyer Chair in Ovarian Cancer Research, Dr. Vanderhyden’s lab has focused on the development of the mouse models that are necessary for preclinical studies – models that just weren’t available when Dr. Vanderhyden started her research career.

Yet despite the progress that has been made on identifying the molecular basis for the many different ovarian tumours (because, as with other cancers, there are numerous subtypes), their origin (in the fallopian tubes in many cases) and markers to predict treatment outcomes, the one area where there hasn’t been progress is in actually treating the disease. The standard of care – surgery and chemotherapy – is much the same as it was 40 years ago.

Ovarian cancer is difficult to catch early – its symptoms, things like bloating, frequent urination, or constipation, can be attributed to any number of causes. So by the time most women are diagnosed, they are at an advanced stage and their five-year survival rate is less than 30%. Every year, some 2,600 women in Canada are diagnosed with ovarian cancer and 1,550 die from it. Ovarian cancer is the sixth-most-common cancer in women and the fifth-most-common cause of cancer death in Canada.

So now, in an attempt to change those numbers for the better, Dr. Vanderhyden, with support from BioCanRx, is turning her energies to immunotherapy, a new avenue that could be the first advance in ovarian cancer treatment in more than 40 years.

Dr Vanderhyden’s lab discovered several years ago that a protein called fibrinogen-like 2, or FGL2, increases in the ovary at the time of ovulation. Ovulation is a risk factor for ovarian cancer, so they have been trying to figure out what FGL2 does in the ovary. FGL2 is known to play a role in suppressing the immune system and it is anticipated that, by blocking this immunosuppressive property, the patient’s immune system can better fight ovarian tumours. The effect should become even more powerful when it is coupled with an oncolytic virus. And in this case, 1+1 really would equal 2: potential for a new and more effective way to treat ovarian cancer.

The roots of this work are many. First, one of the graduate students in her lab attended the BioCanRx annual meeting and returned excited about the potential of immunotherapy. Second, the opportunity to work with Dr. Carolina Ilkow, whose work has focused on immunotherapy, made an obvious connection and contributes to training the next generation of cancer researchers. As a new investigator and a former postdoc fellow in the lab of Dr. John Bell, Dr. Ilkow, originally from Argentina, is applying her knowledge of immunotherapy to ovarian cancer.

It didn’t hurt that “we live on the same floor as John Bell” at the Ottawa Hospital Research Institute, she adds with a laugh.

Another key partner is Toronto transplant surgeon Dr. Gary Levy, who discovered FGL2 many years ago and has shown that it can successfully suppress dangerous immune responses in heart transplants.

“It’s his baby,” says Dr. Vanderhyden. And while he has no prior experience with cancer, “he’s loving the fact that his research could have a wider reach.”

In fact, bringing together the three experts in their fields – an immunotherapy expert, a transplant surgeon and an ovarian cancer leader – is one of the most exciting things about this project. Even more exciting, though, is the possibility of actually improving treatment for a hard-to-treat cancer.

“Immunotherapy has shown success for some cancers,” says Dr. Vanderhyden. “I want ovarian cancer to be one of those.”