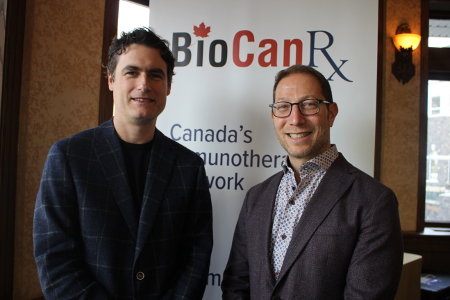 It was the proverbial match made in heaven.

Jean-Sébastien Delisle’s lab at the Université de Montréal had novel methods and capacity to manufacture human immune cells that target cancer cells and that persist for a long time in the body, providing sustained anti-cancer activity.

And the outcome of this happy union? A powerful new treatment for a currently incurable cancer, multiple myeloma.

Despite significant improvements over the past 15 years, multiple myeloma (a cancer that develops in plasma cells, a kind of white blood cell found in bone marrow that makes antibodies to fight infection) is still considered an incurable disease. The current standard of care – a stem cell transplant using stem cells from the patient that are stimulated in the lab before being returned – is effective, but even though the patient can go into remission, the threat of recurrence is always there.

Mounting evidence shows, however, that therapies based on modifying immune cells in the lab and injecting them back into the patient (otherwise known as cellular immunotherapies) can be highly effective – perhaps even curative – for a wide range of blood cancers, including multiple myeloma.

While most immune cell therapies employ a tool known as CAR, or chimeric antigen receptor, Dr. Bramson’s lab is engineering immune cells with a novel tool known as a TAC receptor or T cell antigen coupler receptor. The TAC receptor works differently than the CAR-T therapy, engaging T-cells closer to the way they are naturally engaged in the body.

But that can only happen if that engineered cell can make it out of the lab to be used in people. To do this, the engineered cells must be manufactured at a high standard – known as Good Manufacturing Practice, or GMP – to ensure patient safety and consistency in treatment. That’s where Dr. Delisle comes into the picture.

A novel technology is one thing, he says. But to turn it into something that could become a therapy – that’s a lot of work.

His contribution was twofold. First, he tested different culture conditions in which to manufacture the T cells expressing the TAC receptors. Second, he showed that manufacturing could be automated using the Prodigy, a bioreactor devised by Miltenyi Biotec, which partnered on this project.

The results were exactly what they hoped for.

“We demonstrated that this new cell therapy can clear multiple myeloma tumours in mice,” says Dr. Bramson. “Now we are working toward testing the therapy in humans.”

Indeed, the results of this project will position the laboratories and their clinical collaborators to develop a first-in-humans clinical trial of this exciting new therapy, with the participation of Montreal’s Centre for Excellence in Cell Therapy and its GMP manufacturing facility (which has been an essential contributor to this project’s success). The next step is to work on the process to build more evidence before going to Health Canada to gain approval for a clinical trial.

The implications of this project are significant. The TAC receptor is a novel Canadian technology has the potential to benefit myeloma patient care worldwide, changing the grim prognosis that has, until now, characterized the cancer. And, just as the TAC receptor approach is unique, so is the Delisle lab’s manufacturing approach. The value of its innovation extends beyond this project to be of value to T-cell therapies more generally and will help establish Canada as a centre for cell therapy manufacturing.

And, like so many of the great matches in history, there was a matchmaker to make it happen – in this case, BioCanRx.

“This [project] represents the type of partnership that a network like BioCanRx can promote,” says Dr. Delisle, bringing together researchers in the laboratory and those in the clinic to work together.

“If you don’t have one foot in both worlds it’s actually very hard to do this. The best value is to make sure we can move rapidly from idea to patient.”