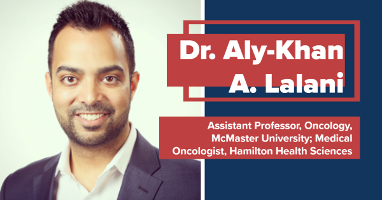 Aly-Khan Lalani is excited. He’s very excited, with terms like innovative and first in the world spilling out as he speaks. And it’s all about a clinical trial of Cytoreductive Stereotactic Hypofractionated Radiotherapy with Combination Ipilimumab and Nivolumab, or CYTOSHRINK. Which sounds, frankly, a bit technical – and makes it a bit hard to see the excitement.

But the title of this BioCanRx-funded clinical trial continues, to say the target is metastatic kidney cancer. And that’s where the excitement comes in.

As Dr. Lalani, an Assistant Professor of Oncology at McMaster University explains, immunotherapy is now the standard of care for metastatic kidney cancer, with the two immunotherapy drugs in this trial, Ipilimumab and Nivolumab, widely used. But adding the radiation – a kind of highly focused radiation called stereotactic hypofractionated radiotherapy (SBRT) – is new. Indeed, as Dr. Lalani points out, this is one of the first randomized controlled trials in the world combining these treatment modalities for this particular patient population.

In this case, the patient population is people with stage 4 (or metastatic) kidney cancer who have not previously been treated for their disease. Previously, up to one-third of patients with kidney cancer were diagnosed at that advanced stage. Sadly, because of COVID-19 and its impact on cancer care, that percentage is at risk of rising, says Dr. Lalani.

The timing of the trial arises from the confluence of a number of factors. First, as mentioned, there is the emergence of immunotherapy as the standard of care for kidney cancer. Second, there is growing recognition that the practice of removing a cancerous kidney is not the best approach for most patients. And finally, the idea that kidney cancer tumours are resistant to radiation is also fading away, thanks in part to previous trials showing the benefit of SBRT in metastatic kidney cancer.

So far, after a delay due to COVID-19, the trial has now enrolled about one-quarter of the 78 patients who will eventually participate and has expanded from Hamilton to Toronto, Ottawa and internationally to Australia. Quebec and Alberta should be added in the next few months.

“The enthusiasm and interest in this trial have never waned, despite the challenges of COVID-19 in cancer care,” says Dr. Lalani.

All participants will receive the immunotherapy drugs, while two-thirds will also receive five sessions of radiation. The result will ideally be a better outcome for the patients receiving radiation as well as immunotherapy, and a new tool for treating advanced kidney cancer.

On its own, that’s pretty exciting. But, as they say on the infomercials, wait! There’s more. And that’s where the BioCanRx support is so critical, says Dr. Lalani.

In the second aspect of this trial, Dr. Lalani and his colleagues want to find better ways to select patients who will respond to this treatment – and maybe even find a way to help patients respond better.

To that end, they are trying to identify biomarkers that will predict patient responses, using tumour tissue, blood and stool samples they will collect from participants at the beginning of the trial, after the first immunotherapy treatment and a year after they complete treatment. The innovation here is in the ability to assess dynamic changes in blood biomarkers as well as inclusion of samples to judge the health of the microbiome – the collection of all the different flora and fauna that exist in our GI tract, including so-called good bacteria. This is a relatively new area of research, with evidence growing of the importance of the microbiome to many aspects of our health.

With the knowledge they gain from this analysis, oncologists will be able to better judge who is most likely to benefit from treatment – and even intervene to improve patients’ likelihood of benefiting, and even potentially reduce side effects from treatment.

“The biomarker work will help answer many important scientific questions. For example, can we aim to give back to patients the “good bacteria” to help improve gut health and thereby benefit more from immunotherapy,” says Dr. Lalani – which would be a real innovation in kidney cancer care.

Achieving these lofty goals could not happen without the BioCanRx core facility, the Human Immune Testing Suite, or HITS, located at McMaster, or without the participation of Dr. Lalani’s colleagues, Drs. Jonathan Bramson and Michael Surette, who have the expertise in its use and in carrying out the analyses.

“This really is team science,” says Dr. Lalani. “It really does, like they say, take a village to raise a clinical trial. We are grateful to patients, their families and the trial investigators for their support.”