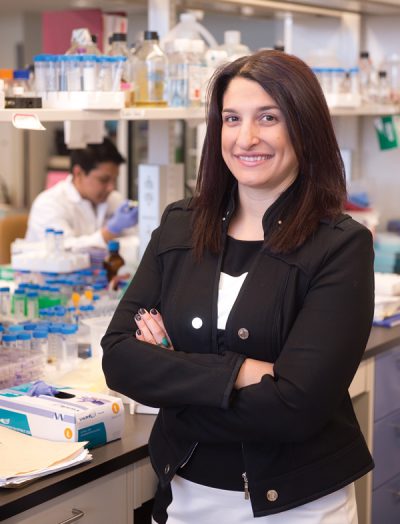 Medical professionals sometimes refer to the “pillars” of cancer treatment. Until recently there have been four pillars: surgery, radiotherapy, traditional chemotherapy, and precision therapy. For thousands of years, surgery was the only pillar supporting cancer care. Radiotherapy, or radiation therapy, which uses high-energy particles to destroy cancer cells became a second pillar in the late 1800s. The third pillar, chemotherapy, was first explored in the 1940s when a derivative of nitrogen mustard gas was tested as a treatment for lymphoma. Precision therapy, which uses drugs or other substances to more precisely identify, target, and attack cancer cells, was added as a fourth pillar in the 1990s. Today, a fifth pillar is being added to support cancer treatment: immunotherapy.

Dr. Natasha Kekre is a hematologist in the Blood and Marrow Transplant Program, and an associate scientist at The Ottawa Hospital. She is also an assistant professor in the Department of Medicine at the University of Ottawa.

Dr. Kekre is part of a team that is bringing the next generation of treatment to cancer patients.

For regular folks with little medical experience, cancer immunotherapy may sound like something from a sci-fi novel. It refers to a treatment that uses patients’ own immune cells to cure their cancer. There are different kinds of immunotherapies, but Dr. Kekre’s research involves using T-cells to fight certain types of leukemia and lymphoma, which are cancers of the blood.