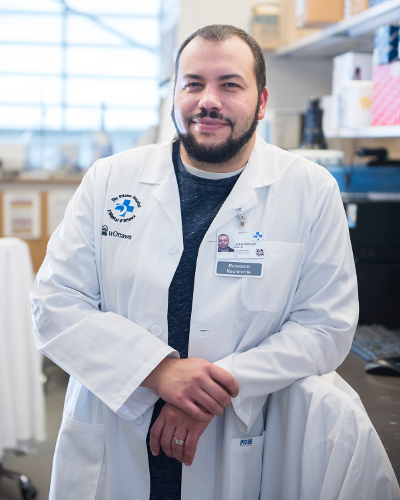 Knowledge translation has become a key concept in the research world – but as usually applied, it stands for taking research discoveries from the lab to the clinic – literally, the journey from bench to bedside.

There’s another way to think about knowledge translation, one that involves translating lab discoveries not only into clinical applications, but also into economic growth, through creating a company to commercialize those discoveries. That is the path taken by Jean-Simon Diallo of the Ottawa Hospital Research Institute (OHRI) and assistant professor at the University of Ottawa. He created a company called Virica to commercialize his discovery of viral sensitizers and take advantage of their huge market potential.

What, you might ask, are viral sensitizers? Good question. To answer it, we have to go back to the very concept of immunotherapy. Immunotherapies come in different flavours. In some instances, they involve the reengineering of cells in the lab to fight cancer, often using viruses as a tool in that reengineering. In other instances, the virus itself constitutes the therapy, as with oncolytic viruses, which need to be directly delivered to the tumor. But either way, cancer cells – all cells, for that matter – have natural defences against viruses, defences that are generally a good thing (think fighting off COVID-19). In the case of cancer, though, you need to break through those defences. And that’s where viral sensitizers come in. They are small molecules that help viruses break through defences. They are, in essence, the third part of the immunotherapy puzzle.

Dr. Diallo first came upon the idea while working as a post-doctoral fellow in the lab of Dr. John Bell, Scientific Director of BioCanRx, looking for ways to improve immunotherapy outcomes.

“We were really concerned about poor treatment efficacy in patients being treated with oncolytic viruses,” he says. “We understood that if the virus doesn’t infect the target cell, you don’t have a therapy. So we were looking for ways to help oncolytic viruses overcome the tumour resistance.”

And while sometimes research is a delicate, targeted undertaking, not this time, Dr. Diallo says. Rather, he applied what he calls “brute force” to the discovery, screening large numbers of small molecules at once to find good candidates to help viruses reach their intended target, a search that led him to viral sensitizers.

“I was waiting in line for a vaccine myself,” he says. “I had to wait because of a lower-than-expected manufacturing output. I put two and two together.”

The “four” he came up with was the realization that his viral sensitizer could work for more than just oncolytic viruses. In fact, beyond immunotherapy, viral sensitizers also have a role to play in fields as diverse as vaccine development and gene therapy – both fields in which a virus is needed to deliver something (an antibody in the former case, a replacement gene in the latter) to a specific target. And that means the market for viral sensitizers, both in Canada and around the world, is both large and growing.

This realization set him on a “parallel path” from his main focus on cancer therapies. While continuing to receive ongoing support from BioCanRx for his work to further test and refine his discovery, he also started collaborating with industry, whose need for virus production is, he says, “enormous” and who recognized quickly that viral sensitizers could help them produce effective viruses for multiple purposes.

Still, Dr. Diallo says, as an academic, he didn’t know much about the process of starting a company and he really wasn’t trained to think that way. That’s where the deep commercialization expertise on the BioCanRx Board came in and Virica was launched in 2018. Today, Virica is largely focused on the lentivirus, a key viral vector used by industry and researchers all over the world to modify the genetic payload of cells.

“The technologies Virica is developing are absolutely applicable to BioCanRx’s mandate,” says Dr. Diallo. “Our success means that there are cheaper ways to produce cancer therapies.”

And, he says, other researchers should be thinking about how to commercialize their work. Thanks to BioCanRx, he says, we have the capacity, the infrastructure and the highly trained personnel.

“We’ve got the talent, we know what we’re doing,” he says. “We should be leveraging this as a nation.”