It’s just a small change from “what if” to “what is” – just change that “f” to an “s.” But that small change could make a world of difference to people with cancer. 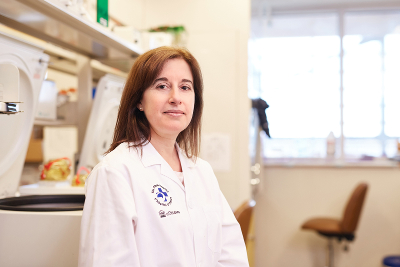 What if you could deliver just one product, in this case one cancer-killing (or oncolytic) virus, to any kind of cancer and have that virus turn into something customized to kill one particular cancer – your own. That’s the challenge that, with the help of an Enabling Project grant from BioCanRx, is driving Dr. Carolina Ilkow, Scientist at the Ottawa Hospital Research Institute and Assistant Professor at the University of Ottawa, and her team (which includes Dr. John Bell, Scientific Director of BioCanRx, Dr. Brian Lichty from McMaster University and many talented trainees and post-doctoral fellows) – and she is quick to emphasize the degree to which this truly is a team effort.

It’s a two-part challenge – first, which oncolytic virus to deliver and second, how to “convince” the patient’s immune system to use the therapeutic information carried by that virus to fight the cancerous cells.

The team is addressing the first part of the challenge by selecting an oncolytic virus that, when delivered to a cancer tumour, can both target the cancer cells directly and also fire up the patient’s immune system to fight the tumour.

That’s the general theory behind immunotherapy. Such personalized immunotherapy, however, as currently conceived depends, in the majority of cases, on obtaining immune cells from the cancer patient, genetically engineering them in the lab to recognize and kill cancer cells and then infusing them back into the patient – something that is both expensive and time-consuming and whose success has been limited to date.

Rather than focus on manufacturing personalized therapies for each individual tumour in the lab, the team has created an oncolytic virus that, when delivered to a cancer cell, can “program” that cell to produce cancer-fighting vaccines in the tumour environment. Their goal now is to test four different strains of that cancer-killing virus to select the most promising among them to move into clinical testing. That’s part one.

The second part of the challenge is for this cancer-killing virus to produce a cancer vaccine that targets a specific tumour. It does this by latching onto the specific tumour antigens (the factors on the outside of a cancer cell that stimulate an immune response).

It’s the next step that’s key – communicating to the immune system just how to best fight that tumour. For this part of the challenge, the team is looking at exosomes – tiny sacs, or vesicles, that are attached to the outside of cells and that facilitate communication among cells – as Dr. Ilkow calls them, the “FedEx system” for cells.

“All cells – regular and cancer cells – need to talk to each other to coordinate their work,” she says. And exosomes facilitate that conversation.

Exosomes are already produced in large numbers by all cells, both normal and cancerous. The idea is that the oncolytic virus will reprogram these exosomes to “talk” to immune cells, thereby “educating” them to recognize and destroy the tumour. Essentially, the process will hijack the exosomes to destroy tumours.

“A single, universal product can be given to individual patients and it will be customized inside the body,” Dr. Ilkow explains. “We’re training the tumour to turn on itself.”

The process could transform the way immunotherapies are delivered, removing the need to take immune cells from a patient and work on them in the lab before returning the souped-up cells to the patient.

“This is really new and innovative,” Dr. Ilkow says. “We’re really excited about it.”

The entire approach was an accident, Dr. Ilkow says. The team was working on another project, when they saw that cells beyond just the targeted cells were dying and wondered why. They thought it might be that the targeted cells were communicating with other cells and passing on specific information. What if, the team posited, it’s because of those communications? They quickly started focusing on exosomes as the vehicle for those messages.

“We took what nature taught us and managed it in a way to develop a new therapeutic platform,” says Dr. Ilkow. “Now we want to use this platform to help patients.”

The goal of this project is to gather the data needed to support a clinical trial application (CTA) to Health Canada, the first step to taking the novel exosome platform out of the lab and into the clinic, where it can begin its journey of making a world of difference to cancer patients – making the treatment a “what is” instead of just a “what if.”