It started about five years ago, with a simple question: if T-cells can be activated to fight cancer, “why only do T-cells? What other ways are there of advancing immune responses in cancer?”

The question was asked by the University of Toronto’s Dr. Sachdev Sidhu and his collaborators, and it wasn’t just an idle question. After a broad look around the various parts of the immune system, he set his sights on macrophages, cells that play a key role in the immune system, both as scavengers, rounding up and eliminating worn-out cells and other debris from the body and as initiators of immune responses against pathogens. Specifically, he looked at a pair of proteins: SIRPα and CD47.

SIRPα is expressed on the surface of macrophages and blocks macrophage activation upon binding to CD47, leaving tumour cells undetected. CD47 is the protein, overexpressed in most cancer tumours, that gives off a “do not eat” signal that prevents the immune system from attacking cancer cells. Among multiple therapeutic potential antibodies developed in Dr. Sidhu’s lab using its cutting-edge synthetic antibody technology, one of them stops CD47 from blocking immune responses (a checkpoint inhibitor as it’s known) while preventing SIRPα from blocking macrophage activation. The result is a stronger macrophage with its eye (so to speak) on a newly vulnerable cancer cell.

The lab used humanized mice, mice with a human immune system, as a powerful platform to test this new antibody. And, says Jeffrey Hao, a research associate in Dr. Sidhu’s lab running this particular project, “I’m excited to say it worked! The antibody showed strong anti-tumour efficacy.” The activated macrophages detected tumour cells and directed an immune attack, while the turned-off CD47 meant the cancer cell had no defences against the attackers.

Dr. Sidhu predicts that there could be a new drug, based on this antibody, in clinical trials within a year.

He is also negotiating an innovative partnership agreement with MedGenome, the biggest genetic data company in India. As well as funding, MedGenome brings to the table their vast array of genomic data, which is necessary to assess who will respond to what therapy. 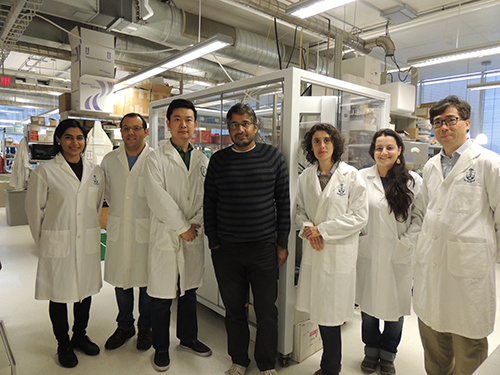 “We’re not dealing with breast cancer or myeloma now,” Dr. Sidhu says. “We’re dealing with subsets of many different cancers” that will respond to similar therapies. So a prostate cancer tumour with a specific genetic makeup might respond to the same therapy as a colon cancer tumour with the same genetic fingerprint, while not responding at all to another prostate cancer therapy. But to figure out who will respond best to different therapies, he says, you need data – and lots of it – on the genetic make-up of cancer tumours. MedGenome has that data.

And he’s asking more questions. Questions like, “why stop at macrophages? Why not find an antibody that can turn on T-cells as well?”, which he calls taking a “cocktail” approach.

In fact, Dr. Sidhu calls his antibody, and similar work going on throughout the world, a “game changer.” And he knows of what he speaks. As the co-founder of the University of Toronto’s Toronto Recombinant Antibody Centre (TRAC), he has been focussed on immunotherapies for several years. Together with his TRAC co-founder, Jason Moffat, Dr. Sidhu recently teamed up with Dr. Max Krummel of the University of California San Francisco, a co-inventor of the first engineered immunotherapy to be approved by the American Food and Drug Administration. Drs. Sidhu and Krummel co-founded Pionyr Immunotherapeutics in San Francisco to turn their research into reality. In December 2017, Pionyr raised $62 million (US) from investors to move into human trials.

Now, with the support of BioCanRx, Dr. Sidhu is putting Toronto on the map as a major player in the development of antibodies for cancer immunotherapies.


Heather Blumenthal has been writing about health and health research for more than 20 years and never loses her fascination with the advances Canadian researchers are making.