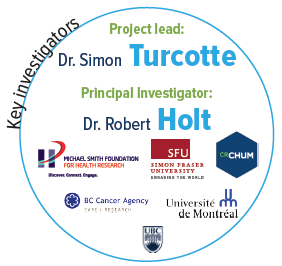 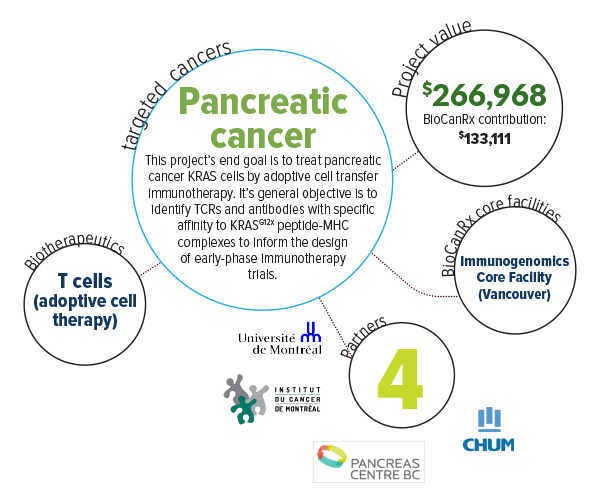 Pancreatic cancer is the 4th leading cause of cancer-related deaths in North America. Approximately 90% of all pancreatic cancers are ductal adenocarcinoma (PDAC). Most patients have locally advanced or metastatic PDAC at time of diagnosis, and can only hope for 11 months’ survival on average with current chemotherapies, at the cost of significant toxicities. Surgery followed by adjuvant chemotherapy is still largely palliative, since 90% of patients will die of recurrence. The large unmet needs of PDAC patients call for the development of novel therapy.

Finding suitable targets, i.e. not expressed by normal tissues and shared across a significant number of tumors, is a major challenge to extend the benefits of this approach to common cancers. Nearly all pancreatic cancers are caused by common mutations in a gene called KRAS. The proto-oncogene KRAS is an attractive target for immunotherapy in PDAC since the activating hotspot mutations G12D, G12V, and G12R are found in approximately 50%, 30%, and 10% of patients, respectively, and occur early in carcinogenesis. Although researchers have not found ways to target mutated KRAS with cancer drugs, recent breakthroughs demonstrate that cancer immunotherapy, which uses the immune system’s T cells to fight off cancer cells, can be highly effective by targeting mutated gene products. This project’s goal is to develop essential data and reagents to develop pancreatic cancer immunotherapy targeting mutated KRAS. This will be done by screening T cells in patients operated on for pancreatic cancer to establish a library of T-cell receptors (TCRs) able to recognize mutated KRAS. These TCRs will be available for off-the-shelf production of large numbers of mutated KRAS-reactive T cells for personalized therapeutic infusions in patients. This approach, called adoptive cell transfer immunotherapy, has been highly successful in targeting genes other than KRAS in other cancer types. The team will also isolate antibodies able to bind the human mutated KRAS gene product complexed with the highly prevalent HLA-A*02:01 molecule. Ultimately, these therapeutic antibodies will have the potential to mediate highly selective immune targeting of pancreatic cancer through additional avenues, such as antibody drug conjugates and engineered T cells.

In innovative cancer therapy, remarkable successes have been seen with adoptive cell transfer (ACT) of T cells. KRASG12D/V/R hotspot mutations are found in 90% of pancreatic ductaladenocarcinoma (PDAC), but have been undruggable with small molecules due to the inherent nature of the mutation that locks KRAS in an active state. Mutant KRAS may, however, represent a significant opportunity for cancer immunotherapy.

Recent data suggest that peptides bearing KRASG12D mutations can be naturally presented at the surface of PDAC cells and recognized by functional T cells in humans. Currently, only four TCRs, which recognize KRASG12D/V epitopes in the context of two infrequent HLA molecules, have been characterized, limiting the development of ACT to a minority of patients. Given the teams in silico analysis predicting that KRASG12D/ V/R peptides can bind with high affinity to many common class I and II HLA molecules, and their access to biospecimens from PDAC patients, they will create a collection of recombinant TCRs reactive to mutant KRAS presented by multiple HLAs. In a complementary approach, therapeutic antibodies specific to HLA-A*02:01-bound KRASG12D peptide will be developed. 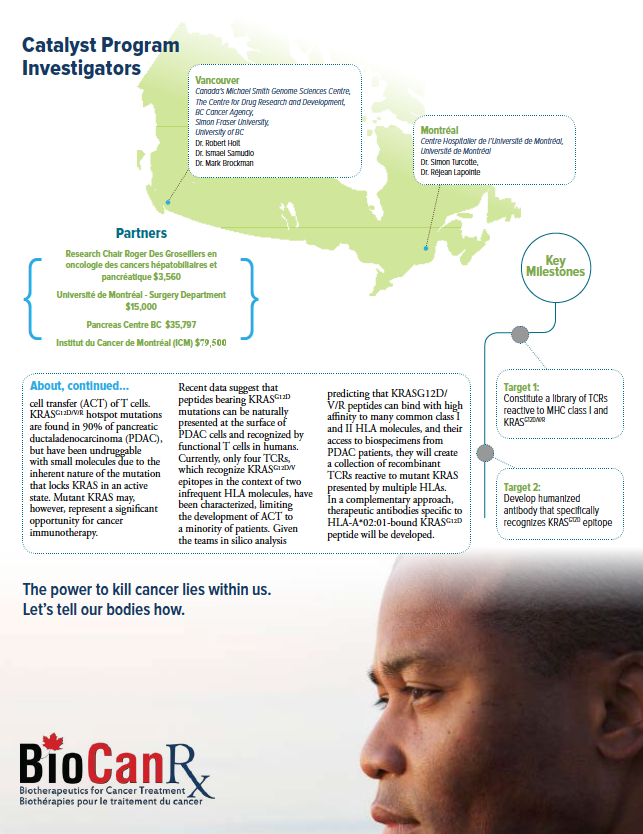